Broken sits in the shade of a dumpster, the heat of the day has made all the cats of the clan seek shelter, and it seems the prey has hidden as well. Almost all the hunting party's have come back empty pawed or with few catches.
"The sun will soon set and I can go on a late night hunting patrol for more food." Murmers broken to himself.

OOC: I hope its OK I assumed the temp and all that...I just really wanted to rp something, anyways anyone with a bloodclan cat feel free to join in!

OOC: Sothe is future bloodclan so..... just hurt him. make him fight evilly.

Sothe walked through the alleyway looking around nervously, he was hoping to find something to eat, like a rat or mouse or.... SOMETHING, when he saw another cat his fur bristled nervously.

Broken notices another cat walk by that he has not seen before. He wonders if Bloodclsn has recruited another cat in their ranks but wasn't sure. He doesn't normally keep up with things like this.
"Hey! Who are you? And what are you doing here?"

Broken got up to face the new cat.
"Well there's nothing around here too eat for a cat like you so unless you want to a few painful reminders about today you'd better move on." he threatened, he didn't particularly like new cats and by now he had not found any trace of Bloodclan scent on him.
Let's see if this Sothe is Bloodclan material, if he fights me maybe I'll take him under my wing.

OOC: I'm going to be using clan labels such as warriors ect. cuz I don't know what else to say.
Also I don't know how you want this fight to go on if you want Sothe to win, Broken to win, or for them to tie.
BTW: italics for me mean thoughts...just wanted to say

OOC: I use italics as thoughts too, also Broken is supposed to win.

"Please.... I haven't eaten in a few sunrises!" his meow sounding sorrowful

"I alredy told you we don't have food for the likes of you! Now scram kid!"
Broken unsheathed his claws, they were reinforced with dog's teeth and their razor edges shined in the setting sun, making sure the Tom knew that he wasn't making idle threats.
This brat is wasting my time I have to go find food and an offering for Morrigan before sunrise tomorrow and if I don't leave quickly all the best twoleg dumps will be picked clean.

"No!" He meowed defiantly "I don't care who you are! I WILL find something!"

"I warned you!" he yowled as he lunged with claws unsheathed and paws forward.
Time to have some fun, I haven't had a fight in a while and my claws are getting blunt.
Broken aimed for Sothe's ear as a warning seeing if the tom would back down.

OOC: welllets see how this goes.

He screeched as broken jumped at him, throwing his forepaw out claws unsheathed

OOC: this will have to be my last post for today I have a meeting to get too at school.

This is pathetic he doesn't even know how to fight, what potential did I even see in him.
Broken batted his paw aside and scrthed him on the shoulder then aimed for his side.
I don't want this to be over to soon so I'll hold back , though I do have to leave.

OOC: mmk also you can powerplay against him i dont care right now

He yowled in pain as claws raked his shoulder, he swung out with both forepaws one after the other

Ooc: Can I join? Clover is new...used to be part of shadowclan then captured by humans and was a kittypet for awhile, then joined Bloodclan. His Shadowclan name was Streakpaw but they changed it.

Clover heard yowls and shrieks of pain, "Hmm, this'll be fun. " Clover smirked as he ran along a shed roof and looked down onto the alley. His bone collar shined in the sunlight and his light brown fur was just washed until a spray of dirt caught his dark brown stripe along his back. He growled slightly and shook it off. His striking green eyes stared down at them, "Having fun?" Clover asked as his paws itched to fight. Clover leaped down and cocked his head, "Mind if I join?" Clover asked as he watched them fight. 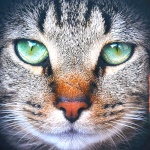