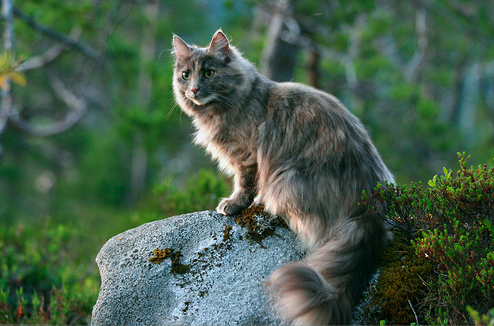 The strong warrior padded through the camp silently. The sun had yet to come up, but this was a normal time for him to wake up. Today, his apprentice's had hard training in front of them. His training methods were hard but rewarding. Most of his apprentices hated him for the first few moons but as he had already proved over and over again, they became the strongest warriors in the clan.
At the moment, he had two apprentices; Larkpaw and Lightningpaw. Today would be their first time training together. He had previously been training them every other day, sending the other on hunting and border patrols all day. They were both not too far off from becoming warriors. Larkpaw and Lightningpaw were similiar in age and abilities so far, and it was time Stoneclaw began thoroughly teaching them battle tactics and fighting skills. He briefly gone over them before in order to make sure they wouldn't die in a surprise attack, but he hadn't taught them much. Now he would have them delve into it.
Stoneclaw was much like his namesake; he was stone cold. He never had a mate, didn't enjoy kits, and was constantly looking over his shoulder. That didn't mean he did not enjoy life however. He enjoyed spending time with Sunstar, for odd reasons, and took a high amount of pride in training his apprentices.
"Lightningpaw, Larkpaw, wake up. Battle training for you both today," He meowed into the apprentice's den. He didn't keep his voice down; the other lazy apprentices would go back to sleep anyhow, but not his. He held his apprentices to different standards. When he was trusted with taking Larkpaw's training over after Bitterstar passed the warrior was determined to live up to the great leader and make Larkpaw a fine warrior. He wanted Lightningpaw to succeed as well. They both had much to do, but they had already accomplished much.

Lightningpaw turned his head to Stoneclaw with a confident smile, he had already woken up earlier. He wanted to impress his mentor, and he padded out of the den quietly, being sure to not wake up the other apprentices. "Hello, Stoneclaw."

Larkpaw was already awake when Stoneclaw ordered them up, but was feeling to lazy to get up of her own accord. When she heard her mentor's voice, her face and muscles tensed comedically as if she was bracing herself against wild, windy gale, for that was what the warrior's booming voice felt like in the mornings.
The young she-cat hadn't thought much on Bitterstar since her passing. She had loved her, of course, as much as most apprentices love their mentors, but Larkpaw was quick to recover and moved on. She certainly hadn't taken it as hard as her friend, Hazelrise, who had become noticeably more detached and sombre since his mentor and mother-figures passing. But it was Larkpaw's strength and perseverance that made her such a promising apprentice.
A moment later, she heard Lightningpaw getting up. As the young tom passed over her, she grabbed on of his hind legs with her front paws, aiming to trip her classmate up as he walked out. It was this that made Larkpaw less of a promising apprentice.

"Hello, Lightningpaw. Get something to eat," The warrior meowed and turned tail. He began walking towards the fresh-kill pile and saw a squirrel he would enjoy eating. His ear twitched however after a few steps taken from the apprentice den. "I saw that, Larkpaw."

As Larkpaw tried to trip him, he pulled away and managed to not trip, and he hissed angrily. "Do you mind?" He asked her, with a look of complete annoyance. Lightningpaw listened to his mentor's words and nodded, grabbing a mouse and sitting down, eating it. Soon hewas done, and meowed, "Are we ready to go, Stoneclaw?"

"Once Larkpaw has finished," The warrior meowed coolly.

Larkpaw rolled her eyes and smiled cheekily at the two toms' sternness before racing clumsily out of the den for the fresh-kill pile. She snatched a tiny bird from the pile and ate it greedily, stuffing the meat into her mouth and spitting feathers everywhere. Her 'charming' display was finished off with a loud burp before she joined her Stoneclaw and Lightningpaw in the centre of the camp.
"I'm ready now," she mewed cheerfully, "What's the plan, Stoneclaw?"

Compared to Larkpaw's attitude, Lightningpaw was smooth and could be quite charming at times. He just looked at Larkpaw's display with a look of pure scorn as he looked back at Stoneclaw. "Didn't you say we'd go battle training?" He asked Stoneclaw.

Stoneclaw grimaced at the she-cat. "Yes, battle training today. But I must teach you manners one day. They are a diplomatic power," He meowed, not looking at either of the apprentices.
"Moving on, however. Today, I will each show you battle moves; you will train against each other, and then you will battle me. We will do that for two days, hunt for the next, and then repeat. Fighting is as important as it is gory."

Larkpaw couldn't help quivering under Stoneclaw's glare, but she soon recovered. She didn't care to impress their mentor nearly so much as Lightningpaw did; the she-cat was far too laid-back and confident for worrying about things like that.
When he went on to talk about their battle training, the apprentice grew tense with excitement and impatience. Those days spent fighting with Bitterstar were some of the best days of her life. She was lacklustre when it came to theory and politics, and she wasn't much better at hunting. But even the sternest cat had to admit that she was a talented fighter for her age.

"First, we will learn defense," Stoneclaw explained as the training area came closer. "We will spend all morning on that. It is crucial for survival. Once you are able to block some of my good attacks, you will learn offense and the two of you will spar. Depending on how well you both do in defense will tell when you do offense."

As they walked, he smirked confidently at Stoneclaw's words. He was a good fighter, as his parents wanted him to be the best apprentice out of them, and he intended to be as well. "Sounds good." He had been training by himself for a little while, and he hoped to impress them both.

Larkpaw saw the training hollow in the distance and raced towards it, leaving the two toms behind. She leapt gleefully into the snowy clearing, toppling over and rolling down until she thumped to a stop at the base of a tree. Lifting herself up again, the she-cat shook her fur free of snow and took in her surroundings.
The area was a crater mostly made up of clear forest floor, with trees encircling it and the odd tree dotted around the base of the ditch. In short, it was the perfect place for a cat to train.

"That, is a good way to lose energy," Stoneclaw smirked at the young she-cat. The warrior flashed through the clearing and aimed at taking Larkpaw's two hind legs out and make her fall, claws sheathed of course.

He padded in calmly and coolly into the clearing, saving his energy, especially after what Stoneclaw had said. His gaze travelled across the clearing, and he gave a nod. It was a good place to train, and he looked at the two other cats.

Larkpaw didn't notice Stoneclaw behind her and was floored by his sweeping paw. She hit the ground with a thump and was once again covered in snow. She blew a leaf off her forehead and looked up at her mentor, humour glowing in her eyes.
"What do you call that move, Stoneclaw?" She mewed sarcastically, purring cheekily.

Stoneclaw shrugged. "Moves are not necessarily named.That was just a sweeping attack on your hind legs that I decided to do because you weren't paying attention," The warrior mused.

He nodded, listening to their words as he padded into the clearing next to them, his ears pricked. He was alert, and was waiting to begin the lesson with them.

"Now, before we begin, the two of you will do some stretches. You are just starting to truly use your muscles and it is important to make them loose and ready to learn," The warrior meowed.

"All right, sounds good." He meowed with a nod. "Is there some specific stretches you want us to do?" He asked his mentor Stoneclaw.

Larkpaw was up and shaking her fur free of snow once again as Stoneclaw began speaking. By the time Lightningpaw got around to asking a question, the she-cat was already losing focus. Her face turned from the lesson into the clear blue Leafbare sky, her eyes glazing as her mind left the earth and entered dreamland.

As he waited for his mentor to tell them what would be doing, he looked around the training clearing again, and then looked to Larkpaw, who looked like she was in her own world instead, at least he was listening to his mentor.

"First we'll stretch the limbs - Larkpaw, pay attention - just like this," The warrior meowed and began to walk with very elongated steps, stretching out his large claws. His muscles rippled strongly underneath his pelt.

"All right, good idea." He did the same as his mentor, streching out his claws for a while before going back to a normal position, he liked this, he couldn't wait for the real battle training though.