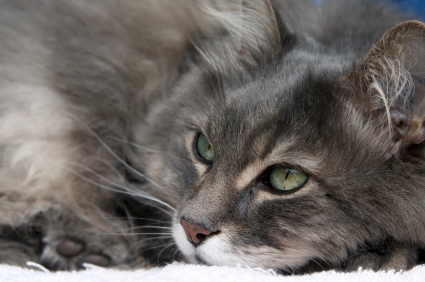 Fadedstripe sighed, watching the sun rise. He had fallen into a routine with his apprentice Pridepaw, and had began to enjoy his company. He was harsh at first as he was with all other cats, but he soon found that was not the type of mentor that he was. Yes, he was strict but he did not rule over his apprentice by fear. He preferred respect. When he was known as Survivor and his father did his 'training' before his time in ShadowClan, he was constantly beaten if he did things wrong. His time as a rogue was not something he enjoyed remembering.
The tom got up and walked towards the apprentice den. Pridepaw's training was coming to an end; his friend, Mochaberry, had just earned her full name and Fadedstripe knew Eaglepaw was not that far off from his ceremony as well. He looked into the den, seeing his apprentice.
"Come. Training," He meowed simply.
Ooc: Fadedstripe has rough speech because his father and mother were Russian, so think of that XD
_________________

Pridepaw had only just woken up. The moment the dismal, grey light of Leafbare hit his eyes, the long tom had ripped himself from his bis bed and was pushing all the moss back into place when his mentor had summoned him. He finished making his nest and quickly shot outside, stopping by the entrance to the den for a long, satisfying stretch.
In the Camp at dawn, Pride saw only a few cats going about the days work and assumed they were all returning from the dawn patrol. The apprentice sidled over to Fadedstripe.
"Morning, Fadedstripe," the young tom yawned, "What are we doing today?"
_________________

Pridepaw nodded obediently and followed his mentor out of the Camp towards the training area. He looked desperately over at the fresh-kill pile as hunger gnawed at his stomach, but he didn't say anything. He assumed the plan was to hunt on the way, and it was part of the warrior code that apprentices must provide for the clan before they eat themselves.

Overhearing the apprentice's stomach, Fadedstripe's ear twitched. "We eat like other clans today. Fish, squirrel, rabbit, okay?" He looked over at his apprentice.
_________________

"I'd eat a boulder if you gave me the chance," Pridepaw sighed humorously, "I'll be fine until we finish training. Then we can hunt for everyone."
Pridepaw had really grown fond of his mentor in the past moon. The two hadn't gotten off to the best start, but that was mainly because Pride had been a new-comer from outside the clans and didn't even know how to behave like a forest cat, making him a frustratingly slow student. But once he'd befriended Mochapaw and Eaglepaw and settled in, he tried tirelessly to impress Fadedstripe and ShadowClan.
_________________

"No, no. Prey is part of lesson. Trust me, frog is worse than squirrel," The warrior meowed and chuckled.
"First, we go to stream that borders ThunderClan. There, squirrel and then ThunderClan fighting," He explained.
_________________

Pridepaw nodded and laughed at the cat's description of frog. He was not looking forward to eating the rough foods of Leafbare again, but they didn't have much of a choice.
_________________

"Okay. What do you know about squirrel hunting?" Fadedstripe asked, walking through the pines. The border was only a few minutes walk at this point.
_________________

Pridepaw remembered hunting squirrels only once before, with Mochapaw and Eaglepaw, when they were much younger. They had little success, but the young tom tried to answer the question anyway.
"Well, I know they're fast, good climbers and bigger than most prey, so they're harder to kill if you get hold of one. There's also no point in pursuing them up a tree - you gotta catch it on the ground or it's history."
_________________

"Are they the hardest prey to catch?" He asked. Pridepaw was prone to asking lots of questions that may seem redundant to any other cat, but he had an intuitive and curious mind that didn't think about restraint when it came to questions.
_________________

"For ShadowClan and RiverClan, yes. ThunderClan and WindClan are light with paws, built for agility among many things," The warrior explained, happy his apprentice was so keen on learning. They had arrived at the ThunderClan border now. "ThunderClan is different from ShadowClan; they follow their rebellious hearts, ShadowClan follows their ambitions. There is difference, see?" He asked.
_________________

Pridepaw nodded, taking in his mentor's words. "Yeah, no wonder we don't get on well with them," the tom chuckled.
He took in his surroundings when they arrived at the ThunderClan border. The fast-running stream was finally free of ice and bubbling at the banks; the piney marshlands of the tom's home was contrasted by the thick, leafy forests of ThunderClan territory. Pridepaw longed to explore the area, to be free to cross the border and look around ThunderClan's home.
_________________

"Tell me, what do you know about ThunderClan's legendary cats; Thunderstar, Firestar, and such?" The large cat meowed, sitting and staring across the border. The clan's ancient history was one of the first things that had peaked his interest in his stay in ShadowClan when he was younger. It was why he came back and decided to follow the warrior code as well.
_________________

This question got Pridepaw. Because he came late into the clan and had dedicated that time more to training than studying clan history, his knowledge on ThunderClan's legendaries was sparse at best.
"Well..." he began hesitantly, "I know Thunderstar was one of the original four cats: Thunderstar, Shadowstar, Riverstar and Windstar. They were the first to set up the clans and follow the Warrior Code. And all I know about Firestar is that he used to be a kittypet, but became leader of ThunderClan..."
_________________

Ooc: Oh my gosh Roo I'm so sorry this got buried!! Please please don't hesitate to post bump!! I don't mind, I promise!

"Well, Firestar was first in line of many good leaders of ThunderClan, he was preceeded by good leader. It went Bluestar, Firestar, Bumblestar, and a few other after that. Firestar lead modern day LionClan against modern day TigerClan and BloodClan. What do you know about those three clans? They tie in to ThunderClan heavily," The russian cat continued on.
_________________

Pridepaw gave a stretch, thinking about the question. "Well... LionClan, the second LionClan, was a combination of ThunderClan, WindClan and RiverCl - No, just ThunderClan and WindClan. RiverClan was part of TigerClan, along with ShadowClan, who at the time was lead by Tigerstar, who I think was and ex-ThunderClan deputy? Anyway, BloodClan was a group of cats from the city - I can't remember who lead them - but they worked with TigerClan to try and take over the forest..."
Pride was nervous that he had got something terribly wrong. He knew his clan history wasn't the best, but he'd made a point in his time here to learn as much as he could about every clan.
_________________

"Yes, that is quite good. But the leader of BloodClan was Scourge. You may be too young to remember, since MAssacre is long time ago, but Massacre was big and intimidating. He was nothing compared to Scourge," He meowed, impressed by the young tom. It took him a while to learn the history of the clans, but Scourge and his story interested the ShadowClanner.
_________________

Pridepaw listened intently, taking in the sounds around him as his mentor's words sank in. A thought suddenly came to him. "Fadedstripe..." He began, a little cautiously, "You weren't born in ShadowClan, were you?"
_________________

"No... I was born to rogue family. Terrible tasks were what we were paid to do. I am much happier being a warrior. Do you mind?" He asked, hoping his apprentice wouldn't be bothered by his rogue origins; the young tom may have come form outside the clans, but he hand't been a rogue.
_________________

Pridepaw gave a small smile, but inside he was beaming. He always had self-confidence issues which came from his alienation from other cats due to his non-wild heritage and solitary tendencies. But with Fadestripe, he felt he was normal.
_________________