The Calm Before The Storm - Open -

The Calm Before The Storm - Open - 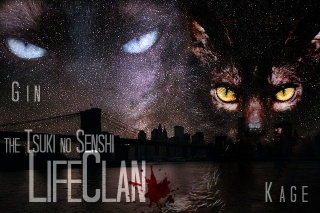 It was becoming increasingly hard for Kage to move on rainy days. As he aged, his stump that remained where his right front leg had once been ached more and more when the air carried the promise of rain. With great difficulty, the ugly tom heaved himself from building to building, his heavy metal leg clanking against the bricks as he walked.
Soon, the first few drops began to fall. The tom stopped at the edge of a building and peered over edge cautiously. He was often cautious these days. Ever since Gin had brought him and the other warriors to LifeClan, Kage couldn't shake the suspicions he had of their new leader, Sabine. And now their new mission disturbed him deeper: he and the Tsuki no Senshi were charged with gathering followers from the other clans.
The warrior's thoughts were interrupted by another cat who pulled up beside him. It was Gin. The angular white warrior towered over his friend as he settled beside Kage and looked over the city with his cold blue eyes.
"How's the leg?" He asked nonchalantly.
"Sore, Sensei," came Kage's reply.
"I trust you will still be able to carry out today's mission?" Gin's icy gaze turned from the city to the warrior. Kage hesitated, nervous of what reaction his response could trigger.
"Of... course, Gin," he sighed at last, "I won't let you down."
"Good. But it's not me you're pleasing. Sabine is your leader now."
Kage flinched. He knew Gin had high admiration for Sabine which felt dangerous to him. He missed the old Gin. The only leader of the Tsuki no Senshi. The only cat Kage could consider a friend.