The New Era :: General Board 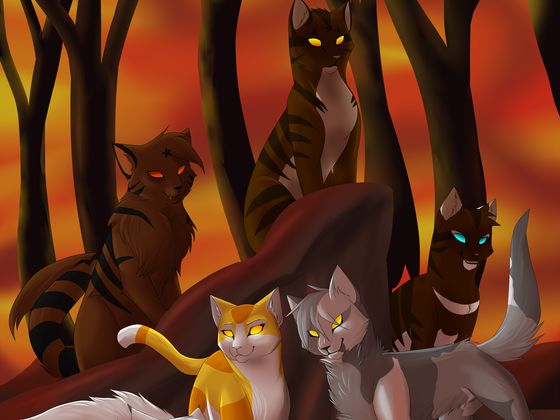 The plot will officially be starting. Everyone can just refer to it as 'the plot' so it doesn't get too tricky.

Basics
The very base of this plot is all five clans against one common enemy. It is very similiar to how BloodClan rose to power in the books by Erin Hunter, only now BloodClan is fighting for their way of life as well.
Much of this plot is going to be character driven. What does that mean exactly? Well, for starters, it means you, the role-player, can affect how this all goes down. There are a few fixed points that will be happening, however.
The fixed points are:
-Sabine will build up her group of anti-clan cats.
-One, unknown clan will be driven out of their territory.
-The three clans left will join up with BloodClan.
-The four clans will fight Sabine's group while the driven out cats try to survive.
-Sabine will be defeated.
-The four clans must retrieve the driven out clan.
How this all happens, again, is up to the site as a whole.

Background
Why a site plot?
It will help members be active and participate, plus it's plain and simply fun.
Where did the idea come from?
I was re-reading the series and Scourge really stood out to me this time. I decided I wanted him to be part of the site in some way.
Who are the big characters?
The heroes (explained further down), the leaders of the clans, and of course Sabine. (All separate entities).
Who is Sabine?
Sabine is the rogue daughter of Rouge, a malevolent she-cat who waged war on all five clans.
Who is Rouge?
She was the young leader of the Malum. The Malum is to the New Era Clans as BloodClan is to the Erin Hunter Clans.

What Members Should Start Doing
For this plot, we are going to have a few heroes from each clan. They will be voted for when the time comes (after Sabine's group is made complete) by members. Each member can only have one hero at the max to make everything fair.
What is a hero?
For this plot, a hero is going to be a cat that has something major in the plot. Not too major, however. We do not want to highlight some players and leave other members out.
An example of important action is one of the heroes may kill Sabine. That kind of thing. Not one of the characters will lead all of the clans to victory.
Any guidelines for making a hero?
Yes, make them brave, but everyday cats. The more likable they are, the more likely they will be voted for.
Does my cat have to die?
No, but death will happen. Please be realistic.
Do I have to make new characters?
No. Your hero could be a cat you have already made.
Also, for this plot, we going to need bad guys, called Sabine Followers for now. Unlike in the Malum, these cats should not be pure evil maniacs that like to kill things just to watch them bleed. Those cats scared me. No. We need cats that want a place to live, and are willing to kill to make their futures better. They shouldn't be completely good, but don't make them completely evil either. However, that being said, those are just guidelines. You can make a cat as evil as you wish. It will just be frowned upon.
Do I have to make new characters?
No. Your Sabine Follower could be a cat you have already made.
Can I put good cats in Sabine's group?
Yes, but they should probably be ambitious/desperate enough to kill for a better home.

Other
Here is some other stuff that didn't quite fit into a category.
Guys, this isn't starting immediately. We're not going to have our cats run into battle tomorrow. This will take time to build up.
Clan cats will not notice Sabine growing her ranks. It's just not logical. We try to be a realistic site and stay true to the books. One cat is not going to go and find out all of Sabine's plans, tell the clans, and save the day. We're weird, we want our cats to suffer. It adds character development.
Please try to be realistic. Dog claws are not common, powers are not probable, and rules will be introduced to the plot as seen fit.

I was thinking of making Pride join Sabine ;3

So just to clarify sorry xD The leaders and Sabrine are the heroes? I didn't expect that if that was the case. Cool.

Oops, forgot the Oxford comma. No. The important cats the leaders, the heroes , and Sabine. They're separate.

Ah this is going to be so awesome! XD

Lol, yes and no. For players that have a leader (Roo12, Feralclaw, you, and myself) we can still have one normal cat become a hero. Leaders are in a different group than heroes, but leaders are naturally heroes. Otherwise they wouldn't be leaders. Get where I'm coming from?
The reason they're separate is because the leader (of an unknown clan... depending on which clan is kicked out) is part of the prophecy, and then there is a different part of the prophecy reserved to the heroes :)
That's some insider information, btw. That isn't officially announced yet, but I don't care if that part is out there.

Ah thanks so much!

Similar topics
» The Rogue Sabine ~ The Next Site Plot
» Plotty Mc. Plot Plot
» Vote for the Missing Clan ~ SWP 2016
» Plot Board Suggestion
» Gathering of Packs (Open, But There IS a Plot!)

The New Era :: General Board