Hey guys.  I was reading Smoke's list and I was thinking about everything and remembering the old site and how I felt ;3;  I just wanted to make this topic to thank all my members.

The old site, I was the first member; I had followed my dear friend Sorrel from the site we met at, to hers.  For support.  I quickly fell in love with the site, little nooby mod me. Everything was running smoothly, new people were joining and everyone was happy.  But I started getting more and more work to do, things that I noticed Sorrel was neglecting.  But I trudged on, dismissing it.  But Sorrel started coming on less and less; until she dropped out for a long period of time.  Month passed, people were worried; so I started accepting hp apps and change things and monitor the entire site by myself.  I was calm, I thought she would come back soon; it was just some vacation.  But that month grew into more months; until the site became slightly outdated and old.  But I couldn't do a thing about it, I was just a mod.  I was so determined that Sorrel would come back, I sent her countless pms and emails.  Sad ones, angry ones, pleads, friendly ones.  Nothing worked, she never replied or went on the site at all.  I was stressed out, panicking as I tried to resist giving up.  But I did, I realized it was time to take matters into my own hands.  So I gathered up the rest of New Era, I reused most of the layout.  I build a new site with the help of my two mods, and everyone who followed me with loyalty to New Era.

When I was trying to deny the fact that Sorrel had abandoned us; I wanted to walk away, to never come back or look back.  I wanted to forget the site, to just leave it until it died out.  But I remember reading all you guy's posts, still noob-like; yet full of life and emotions.  It kinda inspired me, seeing you guys happily rping despite everything.  So I wanted to create a better place for you, a place where you could rp with your friends and let your creativity flow happily.  Rping is an escape for me, just like drawing; so I wanted to give that chance to you all too, even if I had no idea how to do any of this.

So I grabbed the two most active people on the site, the ones I knew would be active and that I could trust.  Smoke and Megarin; Smokey and Meggy <3 I remember staying up late and pming back and forth with Smoke as we pieced together the site as quickly as possible.  I learned the commands along the way, rushing forward eagerly.  Me and Smokey bonded over that tiring session of designing.  I knew I could trust her with the site <3 She was a perfect choice for mod.  And then Meggy~  I quickly realized how much of a wonderful person she was :D We bonded quickly as well, through simple role playing and spamming up chats in threads xD I will never regret the choice I made to make these two beautiful people my mods <3

The site grew, we added more things as I learned the Admin ways.  We gained some loyal rpers, those who still rp with us despite anything <3 They make this site run; they give me the energy to keep pushing forward.  So with two great friends on each side, and a pack of fabulous members; The New Era family was born.  We are all bonded, even the newest members or the ones who don't come on much.  We are close knit, we help each other, we fight, but most of all; we love each other :3

So I want to thank our members, and my mods.  I went from a sad little mod who didn't know what to do, to a experienced admin who loves her site with everything she has <3 It's all thanks to everyone here, cheering me on as I try and make this site bigger for everyone.  I love you all :D

If any of you make a wisecrack joke, I will murder you ._. this is a dramatics thread!

*sniff* *sniff* THAT WAS BEATIFUL!

XD Ew1 Did you have to get open heart surgery or something? XD :P

I was going to make a smart remark until I saw that last crossed out sentence.
I SMILED WHEN I READ THAT. YOU REALLY DO LOVE ME! I love you, too.
I would never leave. Unless I die or I lose internet forever or I get permanently grounded or I start punishing myself and never get on again or I forget about this or I get older and go to college or go in the military and never time to go on or....
I thank everyone on here for my being of a mod. For making this place great. For not arguing and for being the best RPers us staff members could ask for. I mean I wouldn't have anyone to mod if you guys weren't here. ;D

You  are welcome for my very many powerplays which I kept on getting confused with and stuff so SORRY!

Warrior....What did I say I would do if any wisecrack jokes popped up?  ._. *pulls out knife*. And it's fine :D Everyone goes through this learning process, and we are here to guide you on your journey :D

*pulls out sharper knife* You crossed it out XD

I know and BOY! Am I grateful for that!

Lol.
I am acared of knives. i always find a way to cut myself with sharp objects. once I cut my slef with the outside edge of a pair of closed scissors. D:
At least power playing gives me something to do other then just have the title of a mod. I could say something cheesy about how hard I work and stuff on this site but I do nothing compared to Mini. Fixing others' errors and helping people find stuff out is fine but correcting bad RPing and power playing makes me feel like a bad guy. I swear it's just my job! I enjoy this site and helping it overall though.

-.- Knives hate you Meggy, yet they love me <3 I have a set of exacto knives for my art, and i never get cut~

Anyway!  That's what mods are for :D They are supportive figures for the lonely Admin; along with guides and mentors for the new players.  You are a perfect mod Meggy <3 I felt bad cracking down on you guys in the battle thread, but I realized that i had to wake da f up and do my job to guide you guys In the right direction.  That thought, and my grumpy morning mood; created that post in the battle thread xD

Hold on one second ... Comes back with huge tank XD and machine guns

You guys are starting to spam and I haven't even posted! How dare you exclude me in my profession!
I wanted to say thank you, Mini. When I got onto New Era on the first site, I had been lost, my love for writing the only thing encouraging me. When I created Smokepaw I just simply typed what I thought she was like. I had been imagining her for over a week before finding the perfect site for her. It may not have been very active on the site when I joined (2013-04-03) but I stayed. I don't regret a thing.
When I applied for the temporary mod, I had been hoping Meggy would get it instead of me; I had been clueless what Mod was. All I knew was that they helped run the site. I used to think Sorrel was female dog. I realized Sorrel was the one who trained you so I slightly forgave her for never coming back on. And from what you told me about Cheetah, I don't want to ever meet her. The old New Era was pieced together perfectly, but perfection, in my book, is your own downfall. What's more to perfection? Nothing. Once you reach perfection you're over.
I love you too Mini <3 And don't think I'm forgetting about you Meggy <3 You are both like sisters to me now. I only have brothers and they're both jerks who fart in my face, so it's a nice change that I plan to keep.

How about we make a post for us of our first post on the first site, and this site? (RPing posts, that is)

I rank you guys amongst my best friends although I probably will never meet you. Sometimes friendship is better if you only know the inside of a person. (If you re-read that a few times it sounds offensive. Oops.)
I'm so proud of this site and you guys. But mostly myself. It's all about me. :D

Hey, since the Malum is dead, aren't you gonna change your location xD?
And what do you think of my idea?

O.o
Forgot about that. I'll change that now....
What idea? Oh wait I remember! I remember! It's on the other page. Too far away for me to remember.
I'll leave it up to you to try and find them though. I don't remember where they are and my computer's memory is as bad as mine.

Sorry. After this I'll only have 581 posts.
On this site. XP

Your only ahead of me because you were here before me. And you have more characters. Although you killed more then a few yesterday.

Oh hush. I have way too many. You killed Pearlmist; you forget 'bout that? I posted in BloodClan if you didn't see. Deja vu xD

I saw It took me a long time to reply because I'm only half here, half on another site, and half watching You Tube on the iPad.
:D
Multitasker megarin! 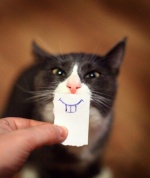