The Pack of Never Ending Winter lives in the northern tundra.
It is mostly forested with few open areas. The forests are thick and are made up of pines, cedars, and other evergreens. Rivers run all throughout the woods. At the edge of the territory the rivers all run into a huge ocean.
Most of the territory is forests, but there is a huge amount of underground ice caves at the edges of the territory near the ocean that run under the whole forest. 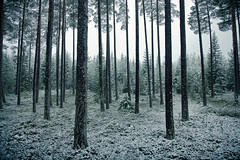 The Central Pine Forests are the main hunting ground for the Pack of Never Ending winter. The trees here are taller and thinner than the ones at the edges of the territory. It is the ideal habitat for caribou and other deer-like mammals. It is the least snowy part of the territory and easy to track in.

The Outer Pine Forests are the forests near the rivers and at the edges of the Central Pine Forests. They are thick and the trees are very close together. They are a habitat for small mammals, birds, and of course, fish. The rivers run all throughout the territory.

The Ice Ends are exactly what their title implies. They are huge ice sheets at the edge of the territory. They overlap each other and lead to the ocean. All of the rivers, creeks, and streams leak into the sea here. It can be quite an enjoyable sight in the summertime. But also dangerous.

The Ice Caves are hollowed out caves in the ice at the ocean's edge. They formed before any wolf remembers from rivers eroding the ice away. Most of the pack lives within the Ice Caves. They are unique to the Pack of Never Ending Winter and are a dazzling sight.
The Ice Caves aren't as slippery as they look because the ice is too cold to have melted enough on the outside to be wet. But they are still difficult to climb if you don't know how.
Many of the wolves in the Pack of Never Ending Winter are adapted to being able to climb up ice due to traction on their paws. Since the pups are born inside the caves one of the first things they have to learn is how to climb the tunnels and navigate them properly. But until they figure it out it's very convenient for keeping wandering pups safe.
The tunnels will have patches of pebbles and sand, especially at the bottoms of dens so the wolves don't have to sleep on solid ice.

Any opinions on anything to change?
I know I added the caves totally on my own accord but I thought they made sense with all the rivers and such in the territory.
(AKA: I really love the pictures that I found)

I love it Meggy!! XD

At least somebody does!
Smoke keeps saying my ice caves look like secret alien lairs.
xP